The batteries in my scale died back in November.

However, there’s nothing quite like a picture of yourself, posted on FACEBOOK, to bring you back to reality—quick. I loved the shirt I was wearing on December 20, 2009. It was the morning of our Christmas program at church and I had gotten a new shirt and paired it with black pants and black boots…hoping to look as ‘not large’ as possible. Apparently the mirrors in my house LIED, because THIS is what everyone else saw: The saddest part is, this is what I looked like four short years ago…after already having had two children in sixteen months: I was about 140 pounds in this picture. A comfortable size 6.

By the end of that year, I believe I had gotten up to about 155. It all went downhill from there. Josh was in school, we lived in a garage apartment at my in-laws’ while he finished school. I was nannying for a widower with two kids, 48 hours a week. We began trying to get pregnant again and it wasn’t happening. I think I just stopped caring. I was so focused on surviving during that time in our lives, I just didn’t pay attention anymore.

Believe me, there were plenty of people around me reminding me of my escalating weight. But for some reason, that just made me shut down even more. My mother would say something about my weight every single time I saw her. A lady at church actually gave me a hug and whispered, “Honey, how much more weight are you gonna gain?” Even my sweet husband would hint around about my increasing size; that probably hurt the most. But when you get to a point where losing a mere 20 lbs will no longer make a dent in your overall goal, it’s very depressing and you begin to feel hopeless.

Every season I was having to buy new clothes. First it was the transition out of the single digit sizes. Then I went from a 10 to a 12, and by the time I got pregnant with Owen in 2006, I weighed 182 lbs.

And now, two and a half years since having my last child, I’ve settled into a routine of bad habits and not taking care of ‘me’. It doesn’t take a rocket scientist to figure out how I’ve gained so much weight and kept it on:

Too much of the wrong foods, eaten at the wrong times (late at night), mixed with no exercise, equals FAT.

It’s gotten to the point that I am terrified of seeing people from my past when I go to the grocery store or the mall. I literally get nauseous and begin to shake when I see that someone has posted a picture of me on Facebook, for fear that someone will see it that hasn’t seen me since I’ve gained so much weight.

So. Enough is enough. I’m ready. For real.

I’m doing this, once again, for accountability. Never in my life would I have imagined that I’d post that horrific picture of myself, along with my weight, for all the world to see. But really at this point, what difference does it make? I am what I am right now and I’m never going to change that by doing the same things I’ve been doing for the past few years. The time is now.

I replaced the batteries in my scale on December 31, 2009. I stepped up and read the results:

Immediately, I began eating better and stopped eating after dinner. I’m drinking more water, and I’m hoping to move our treadmill out of the garage and into the LIVING ROOM for the next several weeks. I will start weighing in and posting a weekly update every Friday. Please pray for me. I want to be healthy. I want to set a good example for my children. I don’t want to fear my husband walking in on me while I’m changing clothes.

I have to do this. 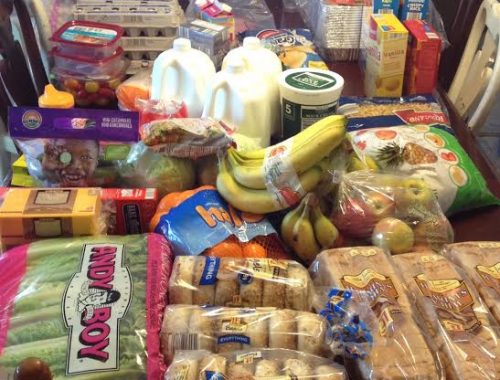 Blast From The Past: Day Two